What Is A Clergy Surplice?

To modern standards, liturgical garments all seem quaint and curious. They not only spark the curiosity of non-practitioners but also of those used to

To modern standards, liturgical garments all seem quaint and curious. They not only spark the curiosity of non-practitioners but also of those used to attending formal services regularly. Clergy vestments all seem to be esoteric in nature or feel pompous and overly theatrical. 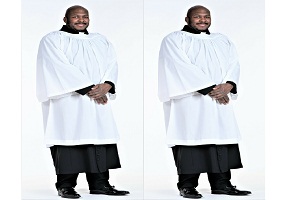 However, the contrary is true. Clergy vestments are more tied to the temporal realm than most people believe, and all of them have very humble origins, as we shall see shortly.

Some of you might have noticed that, during service, pastors or religious leaders often wear a thin, white robe over their typical black or purple cassocks. That is called a clergy surplice, and it has a rather rich history.

The surplice is said to have evolved from the traditional alb. In turn, albs are a direct descendant of ordinary clothing worn during the first century in the Graeco-Roman spheres by commoners. The name means “white” and is a long garment that typically flows from shoulders to ankles and has long and wide sleeves. The surplice is a modified alb and is said to have originated in France or England around the 11th century. It was made of linen or cotton, and was placed over the furs priests wore to keep themselves warm. Back then, it was called superpeliceum: “super” (over) “peliceum” (fur) and, as it often happens in language, the name was shortened to its present form.

It was a lighter and more practical version of the alb that represented the purity of baptism. The surplice gained the favor of the clergy as it was less encumbering. As its use became more generalized, the surplice got progressively shorter in time while it gained in adornment. It got its now traditional square neck and embroidered bordures, and was cut to fall even a short distance above the waist.

The use of the surplice is not restricted to members of the clergy. It could be also seen as part of the regular garments worn by choristers and seminarians. Liturgical clergy surplices today can be longer, covering the knees, with finely integrated lace in the cuffs and skirt line. They still present the square yoke neck and are worn over the cassock and under the tippet or stole.

Today, the most common modification of the surplice is the white rochet worn in Anglican churches around the country, especially in the Church of God in Christ. They are ankle-long and long-sleeved, and typically present cuffed wrists that match the cassock in color.

Addressing the accusation of church vestments being too expressive or presumptuous, there is little merit to that. As we have seen, these vestments have barely changed from the clothes worn by ordinary people centuries ago and have evolved for practical purposes only. In fact, the reason most consider them somewhat alien is that secular fashion has become ever more diverse and ostentatious, while liturgical vestments have remained grounded in tradition and relatively unchanged.

Church vestments serve a purpose that is greater than simply letting us identify the ordained during service. They are the greatest equalizers that remind religious leaders they are part of something greater and that they are but humble servants. The surplice´s square neck, in combination with the tippet, represents the yoke of office and the cleansing nature of baptism.

If you want to know more about the meaning of clergy vestments or would like to find high-quality clergy surplices, visit divinityclergywear.com or give them a shout at 877-453-3535. You can also stop by their store located in Hamilton, NJ, and check out their liturgical garment selection.

Do you want to know what unarmed security guards Los Angeles do? 0

What Are The Best Teeth Whitening Services And Their Cost? 0

How is Instagram Link in Bio important for your business? 0

Will I Find Clear Braces Options for Teeth Straightening? 0